Well folks, we've made it. After years and years of waiting and months of planning and weeks of fretting and days of slogging... we are finally here. Here being the British Virgin Islands, where it all started.

We landed on the 30th of October, after leaving Vancouver on the 29th for a red-eye flight. We flew into St. Thomas in the US Virgin Islands this time, and were pleasantly surprised that it wasn't all that much harder than flying directly to the BVIs (we've found the BVI route to be much more expensive, whereas the St Thomas route got us to the same place, with just an extra ferry in-between.)  We would recommend it, though, as with all things in the Virgin Islands, nothing goes off without a hitch.

Our travel days were easy enough, as in flights were on time and comfortable (United Airlines took great care of us and the kids) and taxi's were available, but the hard part was our stuff. We had packed two full size suitcases plus six other rubbermaid bins of things to live with for a year. A lot of the items are comfort sort of items (like my cast iron frying pan!) and a lot of homeschool material. We did pack a lot of weather gear (I groan at this because Matt has to pack everything to be prepared, but I glare at these rain pants that I can never imagine needing - I may eat my words... but I doubt it), and decent amount of clothes for each of the kids and ourselves. It's hard to pack for a year of being away! I packed some things for the kids to grow into, or something things for holidays, like Christmas gifts or special Easter books etc. I tried to think of everything we thought we might need and would be tricky to find in other parts of the world. It turned into a lot of stuff.

I comforted myself with thinking that some other people would have packed a lot more stuff. I'm not too sure about that now.

So, we landed in St Thomas, hot, tired and sweaty, to a busy airport with free rum samples (welcome to the Caribbean!) and we soon collected all eight of our bags (thank you Lord!) and found a taxi to take us to our ferry. Nothing is very far in the caribbean, but the roads are brutal for pedestrians and especially for pedestrians with close to 400 pounds of stuff to schlep around (wiring that down seems absurd!). The taxi's were happy enough to take us, knowing they could charge us more for filling up their van with our stuff and carrying it in and out. Uhg.

Dollars were flying all over the place, just to get us to the ferry in St Thomas that would take us to Road Town, on Tortola. There we filled out customs cards (everyone's favourite pastime) and again, carted around our stuff. By now, the kids have been running off of three hours of sleep and odd food for more than 24 hours. It's starting to become clear that we are all running on fumes. As soon as we got on the ferry (think: Super-yacht, nothing like our BC ferries), we found a nice air-condition corner and both the kids fell asleep on me. We literally had eaten all of our food and had limited water at that point (ps: you pay for every ounce of water in the caribbean. It sucks, but I get it) and I actually had nothing to offer the kids. Digory fell asleep crying "I'm hungry, Mama". He broke my freaking heart!!

What have we gotten ourselves into?! Part of me sorts broke at that point. I mean, we were safe and healthy and really, the kids weren't starving, they were just really hungry for a full meal. We had to get to our hotel, and fast.

Again, another cab to take us to the hotel four minutes away, and another wad of cash, and we were finally at our first hotel. We needed to be in Road Town for one day to finalize some paper work and sort out some of the money transfer stuff on the boat. That was most easily done from Road Town. Luckily, we have stayed there before so it felt relatively familiar.

We plunk ourselves down, thinking to just order in food (for my poor hungry babies!), and none of the phone numbers work, or no one delivers or nothing is close enough. More of my heart breaking.

Even though it is raining like crazy, I put on Matt's hoodie, don a backpack we emptied and took all the US cash we had an I literally ran to the closest grocery store.

In the BVI's, being "British", they drive on the "wrong side" of the road, which really throws you for a loop. So I dodge in and out of traffic, trying not to die, and finally get to the grocery store and feed my family.

With my backpack full of funny food (and I luckily found my favourite wine!), I dashed back to the hotel room, no rain this time. We ate our ramen noodles and watched Beauty and the Beast on the ipad. At some point we all showered and brushed teeth, but it was the first of many times that I shook my head thinking "what have we done?!".

There we plenty of little hiccups along the way, as anyone who travels knows, but we did eventually make it to our boat. One last cab ride off another ferry, and the driver takes us right to our boat in the boatyard. It was a strange and anti climactic moment. I mean, we'd seen photographs of it already and so far, it looked exactly as the photos described. But I'm beat and so done with moving here there and everywhere, the magic is minimal.

But we all climb up the ladder to check out the boat, for the first time, in the flesh.

Like I said, anti-climactic. But still, no immediate surprises. It's not like when you move into a new home, or check into a hotel room, where everything is ready for you to just slip in and start living. For a boat that has been sitting, things need to be tied up nicely. Meaning, they leave the fridge open, they have all the cushions topsy turvy, the sails are brought in. It sorta looks like a mess. But a mess we just bought and paid for, signed on the dotted line and all that. It's not a problem, it's just the presentation of it. Fairytale over, reality begins.

As is everything in the Caribbean, things take some time. We still can't sleep on the boat (you really don't want to in the boatyard - it's hot and you're inland so the air circulation is poor), so we stay at a hotel just a block down the road (super dangerous road!), where we can chill in the evenings after days of working on the boat.

Though we were told our boat would launch on the 31st of October, we were promptly told it wouldn't happen until the 2nd of November (welcome to the Caribbean, baby!). Well, we take it all in stride, this is just part of the plan, and we run with it.
It worked out rather well actually, because we did have some time on the hard (on land) where we could sort out a bit of the boat stuff, clean it a bit and get it ready to get wet. In hindsight now, we didn't do nearly enough. We were still exhausted and I wasn't sleeping all that well and the kids still have to have their needs met and we need to constantly eat and drink (more water we have to pay for!).

Soon enough, it was the 2nd and we actually got an earlier launch time than expected (8:30AM which sorta turned into about 10AM, but who's watching the clock anyhow?). Once all the right machines got rigged up and could strap our boat up, we were on our way. That was maybe a little surreal. I remember seeing it finally slide down into the water and watch Matt hop onboard to help with something and it really did look like a boat, finally, a real live sail boat.

Matt was in his element, finally. He knows boats and how things go, so once that boat was in the water, he could finally feel like he knew what was happening. So much of this boat process has been out of our hands and we've just had to trust that things will work out, and it seemed, finally, it had.

With the boat in the water, we fuelled up (sweet! it came with a full tank of fuel!) and topped up the water (yay for huge tanks so we can shower without freaking out about not having enough water for coffee the next day - real issues, people). It's sorta that feeling when you walk out of high school for the last time: you feel like there really should be someone official there, pointing you which way to go for the best results, but instead, you just head out the door with your backpack and bad taste in clothing and just hope for the best. It was like that, like we just graduated, and no one once asked "you sure you know how to make this thing work?". They just let us go. (and I still don't have great taste in clothing, but no one cares anymore)

And off we went.

Those first days weren't exactly like how we imagined they would  be: so many things were tied to other people's schedules, everything was more expensive than we'd like, the weather was off and on torrential rain... lots of things. It felt like we were trapped in this funny limbo - again! So close and yet so far. I yearned to badly to just shake free of these limitations and finally be out on our own, doing what we came here for.

But with time and patience and a lot of grace given and received, we got our boat out on the water, and our adventure has begun.

We start these first days staying in the BVIs, learning the boat and moving our stuff in (oh my gosh: so much stuff), and then we will begin meandering our way back towards St Thomas to pick up my brother and sister in law for their visit.

I am super impressed if you've made it this far, reading. I'll be honest and say that I rarely read long blog posts. I like to see lots of pictures and few words, and if there are words, they had better be witty and to the point. I hope I have gotten close, though sometimes there just needs to be a long blog post.

Just for those of you who read to the end, I'll have you know that I just had the most fantastic shower off then back of the boat, in the dark, with crickets and frogs chirping all around. I feel incredibly fresh and brand new. And while I have been typing out in the cockpit of the boat, while the kids are falling asleep and Matt is probably sleeping, too, by now, I can hear tons of water creatures splashing here and there around me. It's pitch black out but it is alive out here! So many strange splashes going on. I am slightly freaked out, but I sorta want a flash light at the same time. I think ignorance is bliss and I shall leave the sea creatures to their evening rituals.

Thank you million for your encouraging words and support while we take off on this endeavour. We love to hear from your all and cherish every note you send. 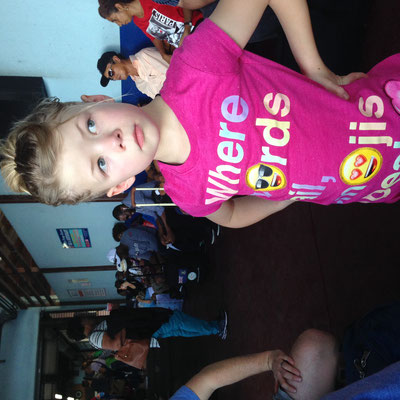 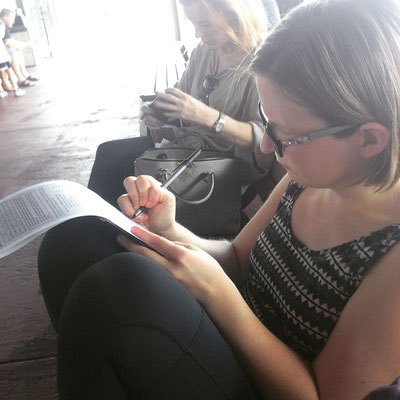 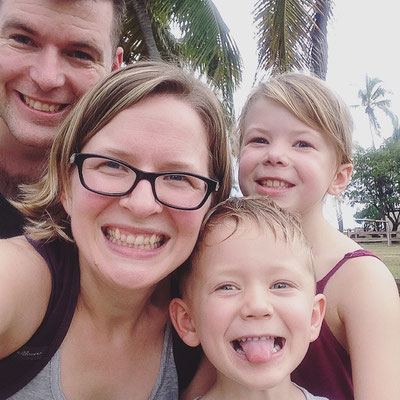 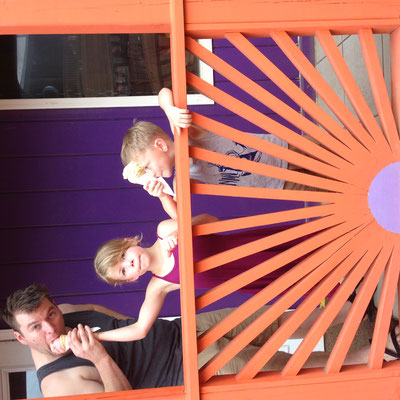 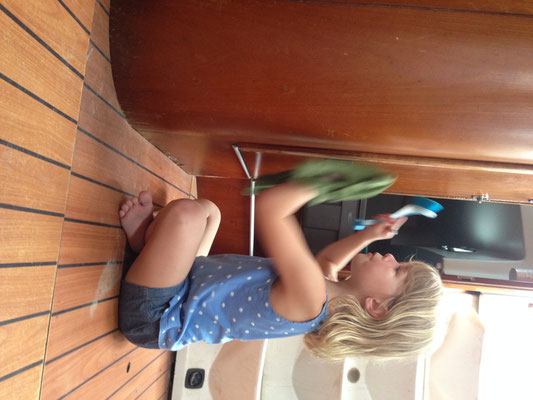 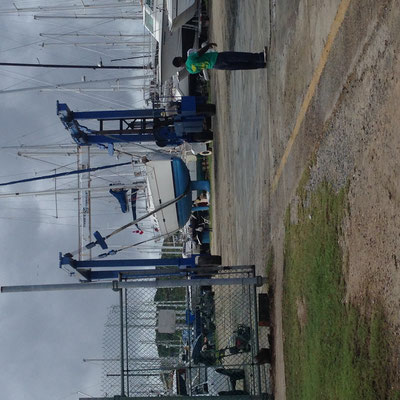 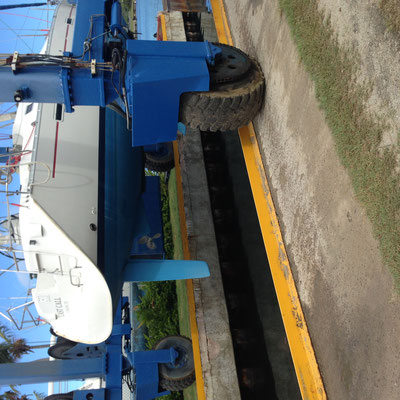 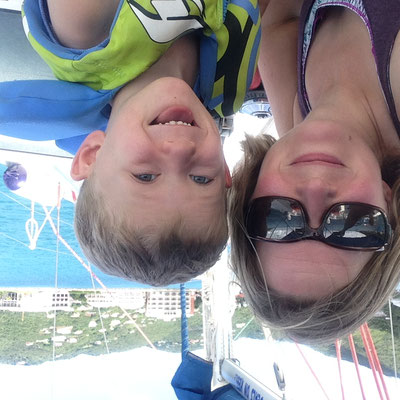 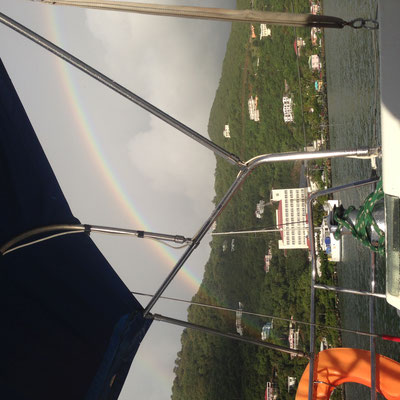 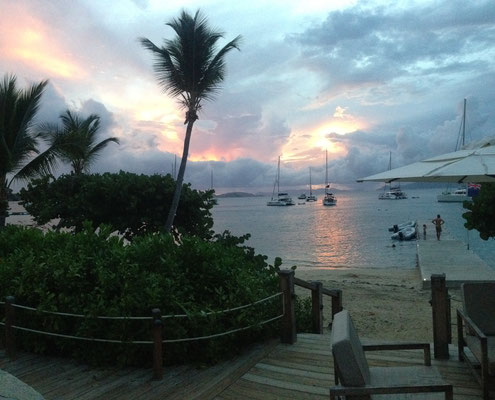 All photos copyright of Ventilly.com